The duo consist of the two Phinova (international emcee and hypeman) and Anfisa Known as Dj Anfisa( one of the greatest fashion Dj in Asia ).

The duo was formed relatively in the autumn of 2015 in shanghai, China and within a short period of time they have already signed with label “digital treak” Their first official independent release “With you”, quickly rushed into #1 on the spinnin records talent pool Electro house Chart.

Beside google play they use Soundcloud as a playground to release “not official” tracks for free downloads, and the last few days they’ve gained over thousand of their followers by pushing their tracks to different Soundcloud blogs for repost. 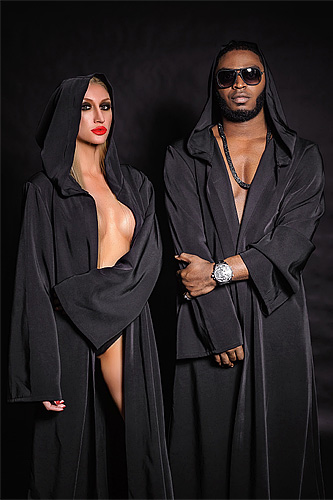 Besides being very talented .they also have huge dj skills and MC background. Before they started producing together as Phinova&anfisa they respectively worked as resident dj’s for over 9 years and resident MC at different clubs in China and for phinova emceeing for top100 Dj’s as mike Williams , bassjackers and Diego Miranda then Japan, Korea, China, Ukraine and Russia for dj Anfisa under Porsche and baidu international company with so many festivals experience in Asia.

Phinova&anfisa is a creative duo with different mindsets which creates a very unique universe around them both in the studio and while they’re performing.

First of all tell my about the start of your professional career?

We met first in shanghai at a fashion show she performed together and after that we decided to make up something together and share our 5 and 8 years experience into a project . And she was so professional and that inspired me

Who or what inspired both of you as an artist growing up?

Phinova I’d have to say my parents above all. My Dad was a professional musician and a public military servant – anfisa: for many years and my Mom has always been extremely supportive of me pursuing anything creative, especially music and acting. Writing was fun here and there as a hobby, but I kept having those, “oh I can do this better than what I’m hearing—so why don’t you?” moments.